The more times that I travel between the same two fixed points the more I feel compelled to find new routes; seeking to exhaust the possible combinations of country lanes, trunk roads, suburban streets, village high roads and dual carriageways. Of course I prefer not to make the journey much longer than the quickest possible route but sometimes curiosity gets the better of me and I head down a country lane I’ve passed by hundreds of times in a bid to understand my surroundings; to surprise myself; to make strange. Perhaps the goal is to turn from the less travelled lane onto a road I have driven down a thousand times but fail to recognise it because I have approached it from a new direction.

Surviving my daily commute – then – means finding as many different combinations of routes as possible between the fixed points of home and office. One of the routes I have explored peels away from Oxford’s Eastern By-pass Road towards Horspath and passes – on the right – the training ground of Oxford United and – on the left – Horspath Sports Ground which is home to Horspath FC. On the most recent occasion that I took this route I was travelling home on a Saturday afternoon. I knew that Horspath FC Reserves had a match with Charlton United FC Reserves in Division Two of the Oxfordshire Senior League. So as I headed east along Horspath Road I turned left into the car park at the sports ground and walked past the athletics track towards the football pitch.

you can’t play a high line

drop in
don’t concede another
back a little bit
that’s the one
drop
middle
seconds
win it
why’ve i got one ‘ere?
why’ve i got one free?
ref
ref
just get behind the ball
come on
someone bring him over
do not lose him
watch your line
kick it
hey hey hey
pressure him
get ‘em up – get ‘em up
well in
winners
time
still on
fucking hell
chase it
did that go off?
well done
defensively get set up line

you’ve gotta see it out man

good ball
time now boys – time
get rid
man on
time time
line
get up – get up – get up – get up
get out
keep pushing
man on man on
hold
hit it
oh for fuck’s sake
ref
fair play
you shouldn’t be up there
you don’t need to be there
ref
come on boys
last minute
c’mon
head
that’s time wasting
winners
what’s the point of that?

I returned to the sports ground the following Monday and sat in the dugout. There’s a City Council depot just to the north and a series of country paths frequented by dog walkers to the east. There was a strong wind and the perspex and aluminium dugouts became aeolian devices as the wind squeezed through gaps and rattled loose panels. Each dugout is different. One has what look like classroom chairs equally spaced within it and the other has a bench. Each has a small technical area marked out in front. 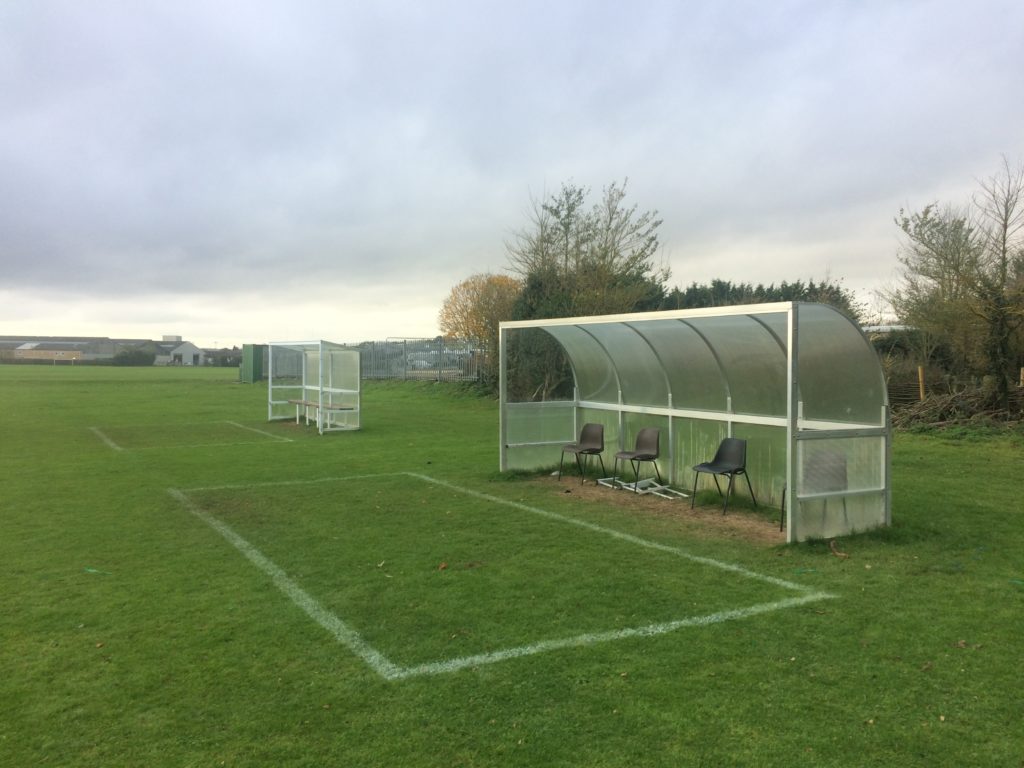 (the dugouts at Horspath Sports Ground)

the call of a wren in the hedgerow; the perspex dugout creaks in the light breeze as the draught forces its way through the joins; traffic sound is constant from the eastern by-pass Road – A4142; passing cars and trucks on Horspath Road to the south emerge from the drone and then recede as they slow down and drive through the village; small birds overhead; distant call of Rooks; a single car passes on the nearby track; the perspex shakes again in a stronger wind now; the sound of tools; detailed birdsong from the hedgerows is hard to identify – perhaps a Robin; the whisper of wind in dry beach leaves; rattle of a trailer; a solitary crow calls three times; a reversing truck – distant; a dry leaf is blown along the turf; a hammer; no wood pigeons here; no red kites; air traffic is lost beneath the shimmering white noise of the bypass; wind begins to form recognisable tones as it squeezes through the gaps in the dugout; possible sound of a distant seagull; dog walker whistling, then shouting his dog’s name; another reversing truck; a small bird flies across the pitch in a series of inverted arcs; truck rattles away from the depot; jangle of a dog-lead beyond the screen of trees; finally the vibrations of a passing jet; another reversing truck.