The fields that I have been exploring at Fortescue Farm are very exposed to the elements. There is a rise to the North that provides some protection for the field nearest the farmhouse – known as First Marsh – but the landscape is open to the East, South and West so the wind can sweep across the fields at a fearsome pace. This particular quality of the site provides a ready supply of aeolian sound as the wind activates gateposts; fence wire; tall grasses; the small copse of trees near the dry river-bed; and any other objects that might vibrate in the wind. Following serious flooding, which had damaged the fencing in the fields new gates and gateposts are installed. This is the blog post from a  particularly windy visit:

On April 16th I visited the site with Emma Welton. As we walked away from the relative shelter of Fortescue Farm it became evident that strongly gusting wind was going to be a strong feature of the day. The wind cut across the site making the sound of the wind in my ears the most prevalent sound of day. This always seems amplified when wearing headphones as the wind is channelled through the gaps between the headband and the earpieces. There’s very little shelter on the site until you get to the copse of trees in rough marsh so this made recording very difficult even with a blimp. We heard all manner of aeolian phenomena during the day including the crackle of dry grasses; the tapping of tree branches as they are pushed around; the flutter of boundary tape; and the rush of white noise as the wind got amongst the grass in rough marsh. The most distinctive aeolian phenomena of the day was the sound made by the passage of the wind through small holes in the new gates that had been installed to replace those damaged in the flooding earlier in the year. We set up next to one of them and spent some time listening.

Later that day we worked with the violin in the centre of one of the fields and listened as the wind activated the strings. 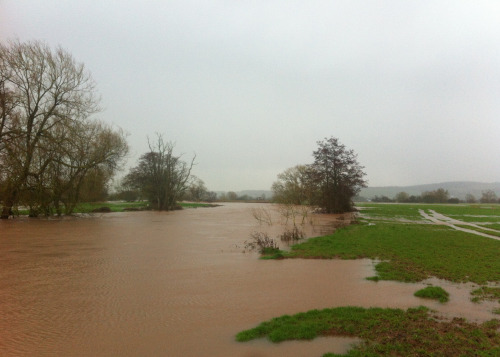 These two recordings made with hydrophones (Aquarian Audio) provide different perspectives on the River Exe in flood. The first is one of the first recordings that I made as part of somewhere a field in January 2013 whilst the second was made in May 2014. During many of my winter visits to the field in the first two years of the study the River Exe was either lapping at the top of its banks or was spreading out across the fields.

The first recording was made by hydrophones cast into the flow of the river. This is what I wrote in my blog:

This is a recording i made on my first visit to Fortescue Farm. The River Exe was in flood and had swept away parts of the river bank and there was driftwood scattered across the fields. Riverside fencing had been washed away by debris and it was hard to tell where the river ended and the fields began. I used two hydrophones to make this recording. One of them i cast as far out into the River as i could whilst the other was closer to the bank. The river was moving very quickly and in the recording its possible to hear the clatter of small stones as they are swept along past the hydrophone.

The second recording – as noted above – was made in May 2014. I arrived in the field just as the River was breaking its banks and stretching out across the fields. As I left the River was lapping at the top of my boots:

…the River Exe was just beginning to break its banks. As I arrived the water was seeping into First Marsh. By the time I left several hours later their was a foot of water across the field flowing swiftly towards the River on the other side of the fields and short circuiting the passage of the Exe – making small islands across the landscape. As the River rose I placed a hydrophone in the soil and listened. As soon as the banks were breached the water sped down the slope and eventually created a channel across the site linking up with the Exe again as it headed North West towards Brampford Speke.