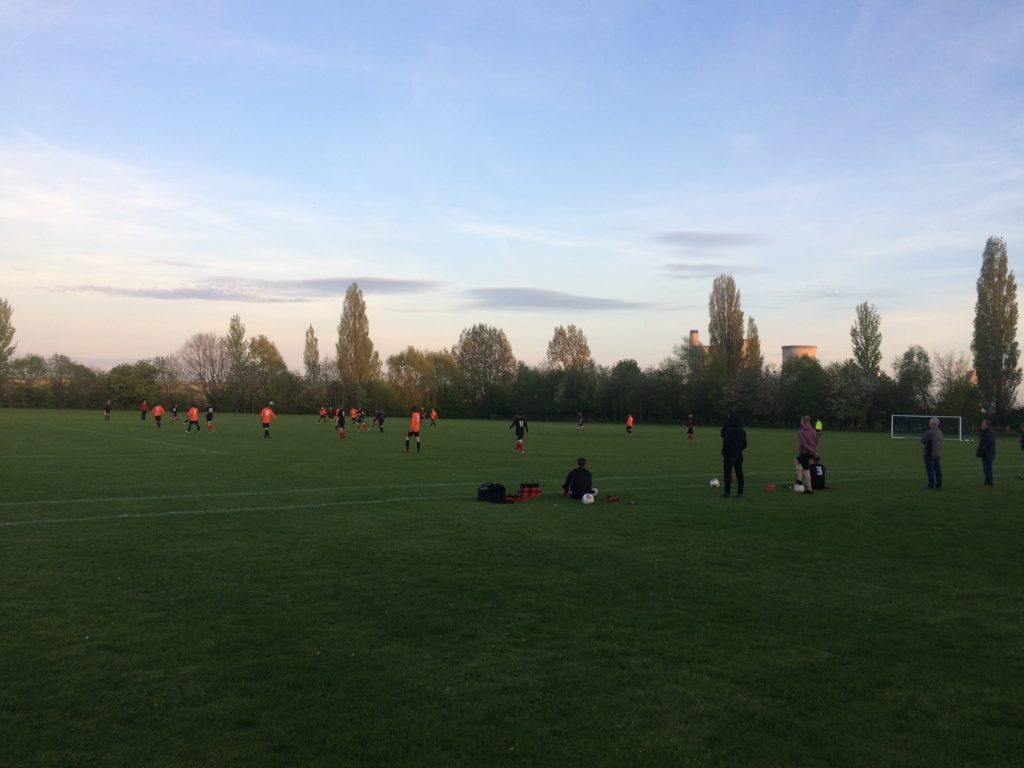 On the 11th April this year I visited Sutton Courtenay FC for an evening match in the North Berks League Division Two against  Westminster FC who eventually ran out as runners-up in the League. I have already posted sounds from the match and considered the ebb and flow of the game as a sounding event that articulates the playing area, the recreation ground,  and the fields and lanes that surround it.
As I have spent more time on football pitches in Oxfordshire – and around – with both the presence and absence of football I have found that two of the most dominant sounds are those of the wind in trees, hedgerows and grasses; and of birdsong. Both are complex and detailed sound worlds. When describing the sound of wind activating leaves, branches and grasses there are so many factors that impact on what we hear – the size and structure of the leaves; their density; whether they are fresh and supple, beginning to dry, or brittle; the strength and direction of the wind and whether it is moving whole branches or just gently shifting the position of individual leaves; and whether the leaves are coming into contact with each other or nearby objects such as fenceposts, wires, boundary walls and so on. The wind is never regular in speed, direction or pressure and so one of the real joys of listening to its impact on trees and hedgerows is the way that it shifts and moves its attention so that at one moment the leaves in the higher branches of the trees are sounding and then at the next they are silent whilst a gust is sounding the smaller leaves in a hedgerow twenty metres away – it is a shifting, ephemeral soundscape. Thomas Hardy’s account – from The Return of the native – of an Aeolian experience on heathland provides a musical analogue:

It might reasonably have been supposed that she was listening to the wind, which rose somewhat as the night advanced, and laid hold of the attention. The wind, indeed, seemed made for the scene, as the scene seemed made for the hour. Part of its tone was quite special; what was heard there could be heard nowhere else. Gusts in innumerable series followed each other from the northwest, and when each one of them raced past the sound of its progress resolved into three. Treble, tenor, and bass notes were to be found therein. The general ricochet of the whole over pits and prominences had the gravest pitch of the chime. Next there could be heard the baritone buzz of a holly tree. Below these in force, above them in pitch, a dwindled voice strove hard at a husky tune, which was the peculiar local sound alluded to. Thinner and less immediately traceable than the other two, it was far more impressive than either. In it lay what may be called the linguistic peculiarity of the heath; and being audible nowhere on earth off a heath, it afforded a shadow of reason for the woman’s tenseness, which continued as unbroken as ever.

Throughout the blowing of these plaintive November winds that note bore a great resemblance to the ruins of human song which remain to the throat of fourscore and ten. It was a worn whisper, dry and papery, and it brushed so distinctly across the ear that, by the accustomed, the material minutiae in which it originated could be realized as by touch. It was the united products of infinitesimal vegetable causes, and these were neither stems, leaves, fruit, blades, prickles, lichen, nor moss.

Alongside the sound of the wind the sound of birdsong is – as mentioned – one of the most dominant aspects of the soundscapes that I have experienced during the project. Up until this stage I haven’t really attempted to go beyond the description of the phenomenon as just that – birdsong. There has been no attempt to identify species or consider whether the song is coming from a long distance, from the treetops or from the hedgerows. I began to think that I should seek to rectify this but have precious little knowledge of bird calls beyond the most common participants, the Chaffinch, Blackbird, Jackdaw and Wood Pigeon. In order to begin to decode the birdsong in the recording featured below I enlisted the help of ChirpOMatic – an app that automatically identifies bird calls. It was developed by computer scientist Alex Wilson and biologist Hilary Lind. In 11″ episodes I applied the app to the recording. ChirpOMatic provides three top matches and two runners up for each recording it makes. I have included the top matches in the transcription below.

What soon became clear was that ChirpOMatic was perhaps hearing birdsong that wasn’t there – possibly as a result of the multiple sounds present – and was also missing some birdsong as a result of it being too distant or obscured by other more dominant sounds. For example, there is a constant chirp of Sparrows in the background of the recording and these are not picked up by ChirpOMatic and the call of the Peacock also fails to register. The combination of birdsong, shouts from players and managers and other sounds in the soundscape make ChirpOMatic‘s task a tough one. The Mallard identified at 1’50” is almost certainly the result of one of the substitutes walking to the carpark to get the mud off his boots by knocking their soles together; whilst the Lapwing’s alarm call identified on several occasions is probably the result of – amongst other things – a player calling hey! hey! hey! hey! at 2’45”. What I did establish through reference to the identifications of ChirpOMatic and my own research was that there were almost certainly calls from the Chaffinch, Blackbird, Wren, Robin, Peacock and Sparrow plus some that remain unidentified. Despite ChirpOMatic‘s insistence the presence of the Curlew, Green Woodpecker, Starling, Song Thrush, Pheasant and Mallard is unlikely on this occasion!

The recording in question was made on the threshold of the car park next to the gate post:

The drone of distant traffic can be heard from the A34 to the West and the A475 Abingdon Road to the North. There are occasional sounds of local traffic on the High Road.

The muffled thud of boot on ball.

The ball is closer now. A clear sound of contact.
Car keys.

The soles of a pair of football boots are tapped together to clear them of mud.

The sound of clapping.
A distant peacock.

The muffled thud of boot on ball.

A car passes by. 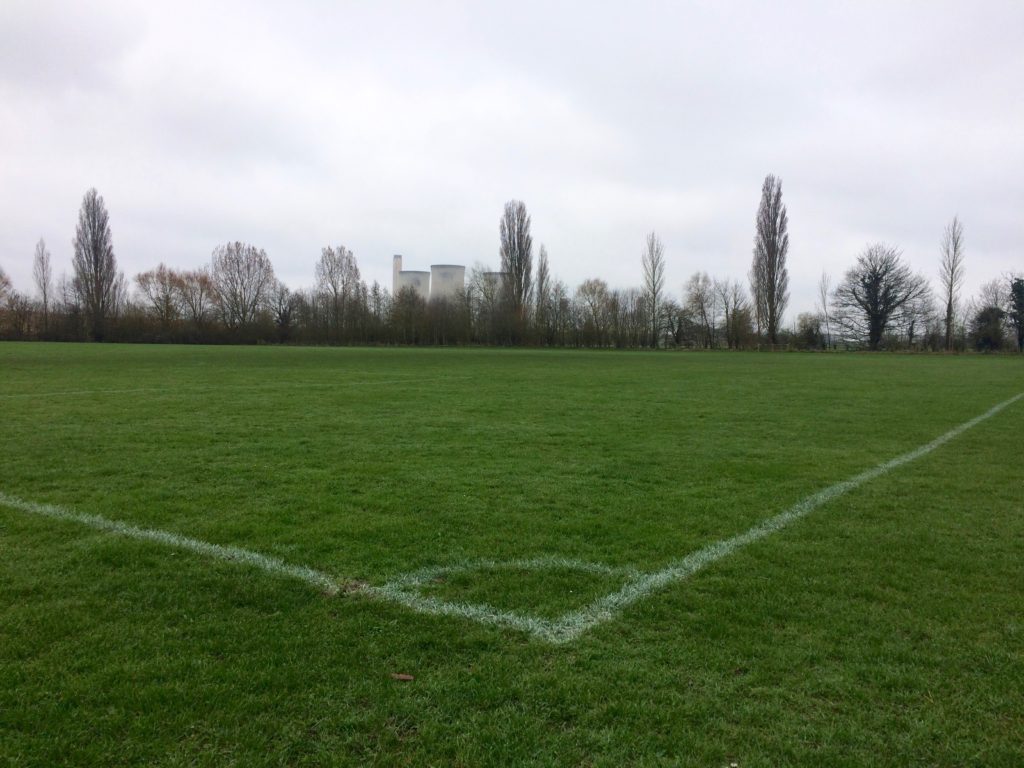 The soundscape at the Sutton Courtenay Recreation Ground – home of Sutton Courtenay FC – is dominated by traffic noise from the A34, A4130 and the Milton Interchange. There is birdsong from nearby hedgerows and poplars; and occasional air traffic that activates the air with slowly phasing vibrations. Didcot Power Station stands to the South of the village. As part of Get Rid! I have been visiting football pitches and making recordings of the sound of football not happening – the sound of the absence of football. I made this recording on a visit to the Recreation Ground in March: 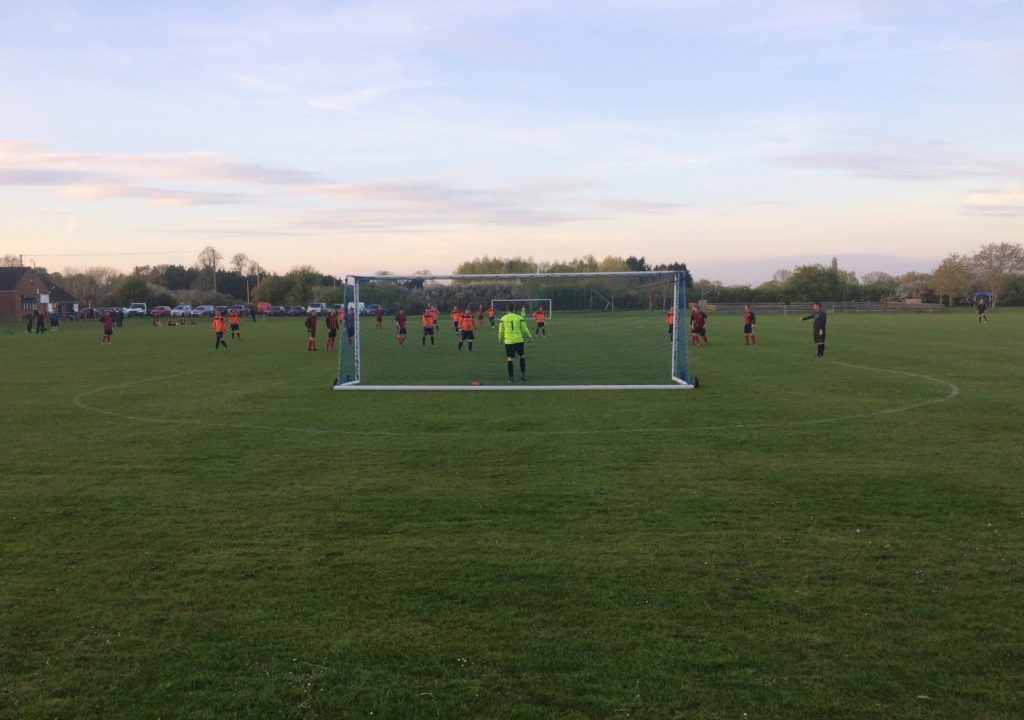 One evening – several weeks later – I headed back to see Sutton Courtenay FC take on Westminster in the North Berks League Division two. During the second half I stood behind the Westminster goal on the South side of the park. Amongst the first sounds that can be heard in the recording are those of a penalty being converted – the thump as the ball is struck; the crack as the ball hits the back of the net – followed by sporadic applause. The sound of the ball being struck is thunderous at times and travels farther than any other sounds of the game – like a bird-scarer or gunshot. As the play moves towards and away from the Westminster goal the sound of boots striking the ball is a constant.

What interests me about the experience of listening to the game from behind the goal is the ebb and flow of the sound as the focus of the game moves from end to end. As the play approaches the westminster goal the listener’s attention is drawn away from the soundscape of tyres on asphalt, birdsong and vibrating air to the shouts of the players. The waves of activity bring sound with them and take it away again. This is mobile sound-making. As the play moves away from the Westminster goal the voices of the players begin to articulate the space of the pitch as their commands bounce off the walls of the pavilion and spill out into the surrounding lanes and fields:

follow it in
everybody out then fellas
follow it in
fella what’s happening
Well done
Come on then
Fucking heads up
come on then all of us
go again, go again
Keep playing
win it back
fucking straight in son
go on son
let’s go again then son
wide
wide
help him out
time, time
shape
hold
switch on
down ‘ere
man on
back, come back
get up, get up, get up
man on
one of you
down the line
wide
OH!
well done, well done
get back, get back
head up
watch your back, watch your back
out, get out
and again, and again
away
up, up
man on
switch
feet
ref
go on, go on
stay there
working now
fucking hell
time, time
man on
man on, man on
go on mate
hold him up
how are you doing
well done
short, short,
wake up, wake up
do it early
coming in
round the back
away
good ball
now
one of you
up then, up then
eighteen, eighteen
good well done
well done
walking
watch that midfield
early, early
eighteen
up, up
calm it down
seven
early
four
are you going with four?
runners
pull out, pull out
put a name on it
well done
settle, settle, settle
don’t dive in, don’t dive in
ref
do it early, do it early
turn, turn
i’ll have it again, i’ll have it again
hold him, hold him,
shoulder, shoulder
let it go
settle down a little bit eh
a little bit yeah
talk him in, talk him in
hey reds come on, sharpen up, you’ve gone off it
alright, alright
squeeze, squeeze ‘em up
get hold, get hold
alright
I’m behind you, I’m behind
half way, half way fella
don’t foul, don’t foul
settle, settle
our ball
do it early
around you
yes, in here
come on boys all the way
get up, get up
stand ‘im, stand
well done
well done
well done
man on, man on
one-two, one-two
man on
if you want
touch it away, touch it away
leave, leave
square
hey, hey, hey
time, time
mark him
head
away
left back
one, one
in it comes
eighteen
up, up
stay on your toes
don’t dive in
channels
if you need, if you need, if you need
feet
middle
ref
yeah
ref
okay
stay back
played fellas
well done fellas
good job in there yeah
to him
out we go, out we go
push wide
push up then boys
do it early
time, time