On Janni Talu there is a tiny lamb whose mother has not enough milk to feed him. He is fed instead by an obliging Nanny goat, who has extra milk. Because of the extra attention he receives from Joel and Julika, he is unafraid of people, and very friendly and vocal. The tiny lamb has a tiny sound. 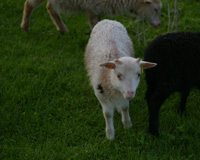 The phrase “Wool on the Hoof” comes from an agricultural award I saw at Jane Knowles’ house in Cumbria, in the UK. This prize is awarded in the UK to the sheep with the most excellent fleeces, according to breed specifications. Jane and Brian Knowles’ Rough Fell sheep have won this award several times, because their fleeces are – as per the breed – long, strong, white, characterful, and perfect for stuffing mattresses! There is no “Wool on the Hoof” agricultural prize in Estonia as far as I know, but several shepherds and wool enthusiasts have built the organisation “Hea Villa Selts”, which means “Good Wool Society”. Surely the sheep grown by members of Hea Villa Selts would be the most likely candidates for the “Wool on the Hoof” prize-category, if such a competition existed in Estonia?

Here is Jane talking about the mothering qualities of the Rough Fell Sheep.