The Oving & District Villages’ Cup Competition affiliated to the Berk & Bucks FA was founded in 1889 and since 1892 the final of the competition has taken place at Oving Recreation Ground. I visited the Recreation Ground in July last year and listened to the sound of football not happening. You can find out more about that here.

It had always been my intention to return to the grounds that I had visited on the route between Brightwell-cum-Sotwell and Winslow and experience football taking place but somehow the season almost seems to be at an end and the fixtures are running out. I was casting about for potential fixtures to attend when by chance I came across the Oving Villages Cup Final between Long Crendon – who were also involved in the first final in 1890 – and Great Horworth. I arrived just before half-time and so missed the only goal of the game – Great Horworth held on to that slender lead until the final whistle.

The matchday programme included this information about the origins of the cup from the 1928 programme:

The Oving Villages Cup was formed by subsrcibers of the villages within a 12 miles of Oving in the year 1889, Mr James Evans of Oving being the Chief Organiser and acting Hon. Secretary. The first president was the late Rev. I Hill, the Rector of Oving.

The worthy Rector was obviously a football fan, for research by Hal mason of Sudbury Suffolk reveals that he appeared for the Pilgrims when they lost 3-1 to Foresters in the FA Cup of 1881.

The founder members of the competition were Waddesdon, Quainton, Long Crendon, Granborough, Oving and North Marston. The first two finals were held in Waddesdon but all subsequent finals have been held at Oving Recreation Ground.

Knowing that the cup final had been played on this site since 1892 set me thinking about how the sounding environment of the match would have changed over that period. A wind was whipping the black refuse bags attached to the boundary rope into feverish and sporadic sound-making – like aeolian devices – catching the wind and then collapsing inert as the breeze passed. Perhaps this is a sound unique to this year – lightweight recyclable black bags as opposed to their sturdier more heavily plasticised counterparts. What about the trees around the ground. How much has that changed in the one hundred and sixteen years since that match? The sounding environment would be completely different if the tree line had changed significantly. As the Great Horwood keeper banged his studs against his post just before a corner I began to consider the sounding history of that activity. When did this originate? If goalkeepers were doing this in 1892 what did leather studs on wooden goalposts sound like? I also started to think about the way that the formations would have changed the soundscape. 2-3-5 was the standard formation in the late nineteenth century. This would have changed the way that the sound-making activities of the footballers articulated the playing area – and what about on-pitch communication? left shoulder! Stick it in the mixer! Time! 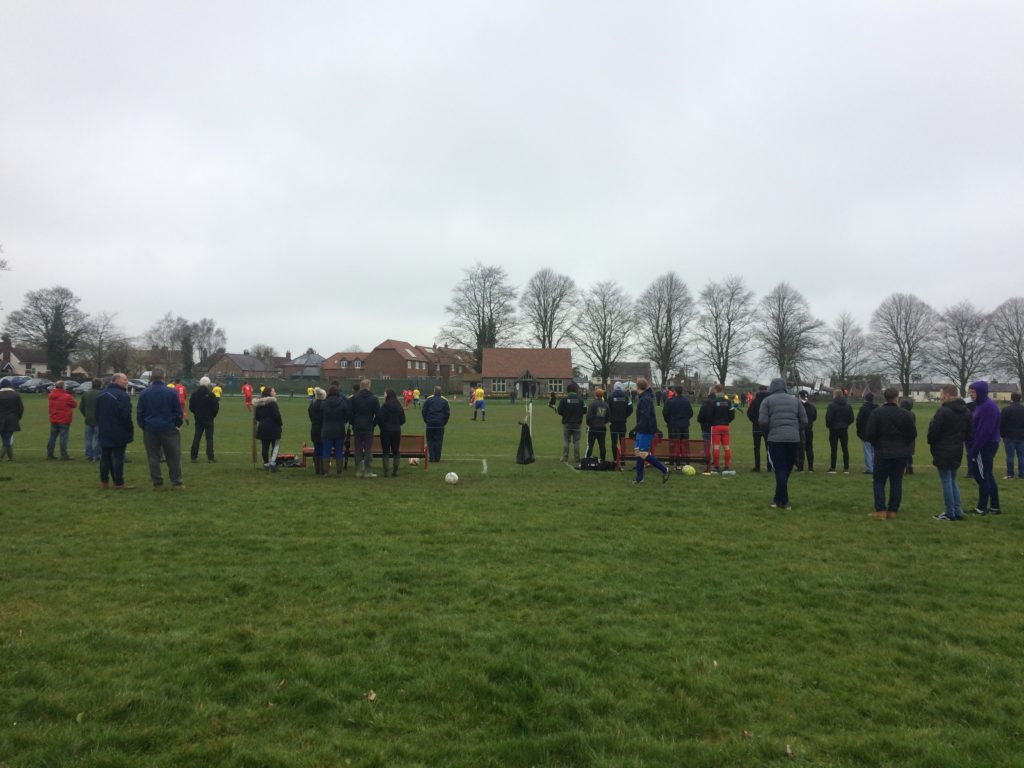 (looking North towards the village hall)

when the final man comes in

whoever shouts gets the free-kick 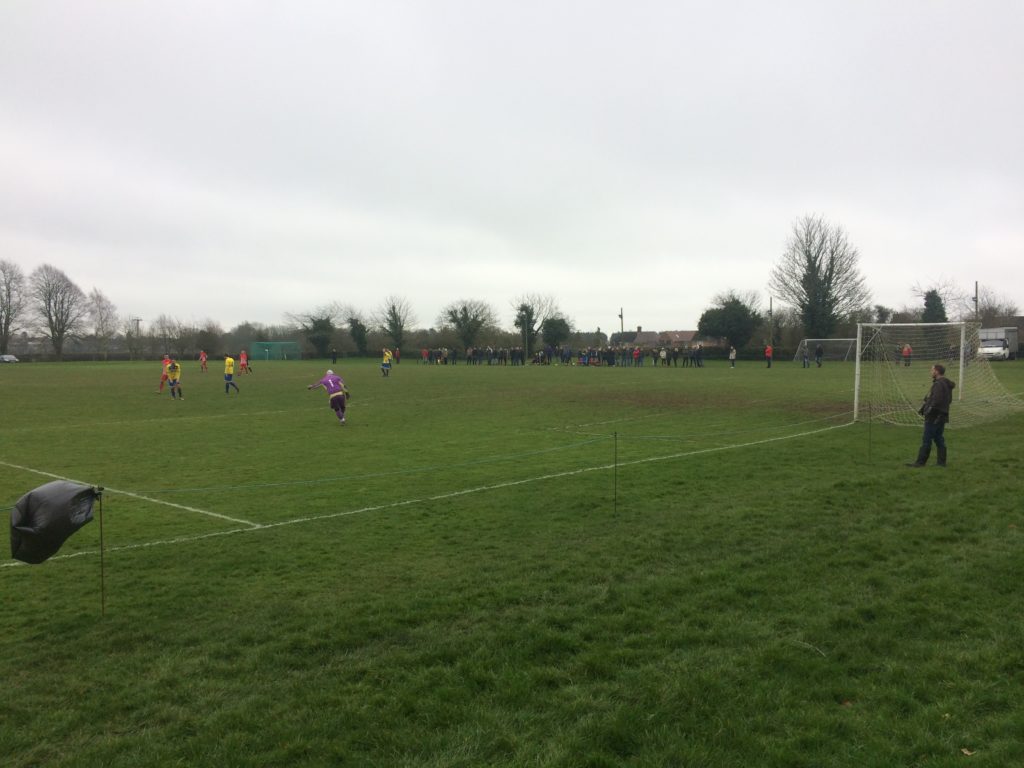 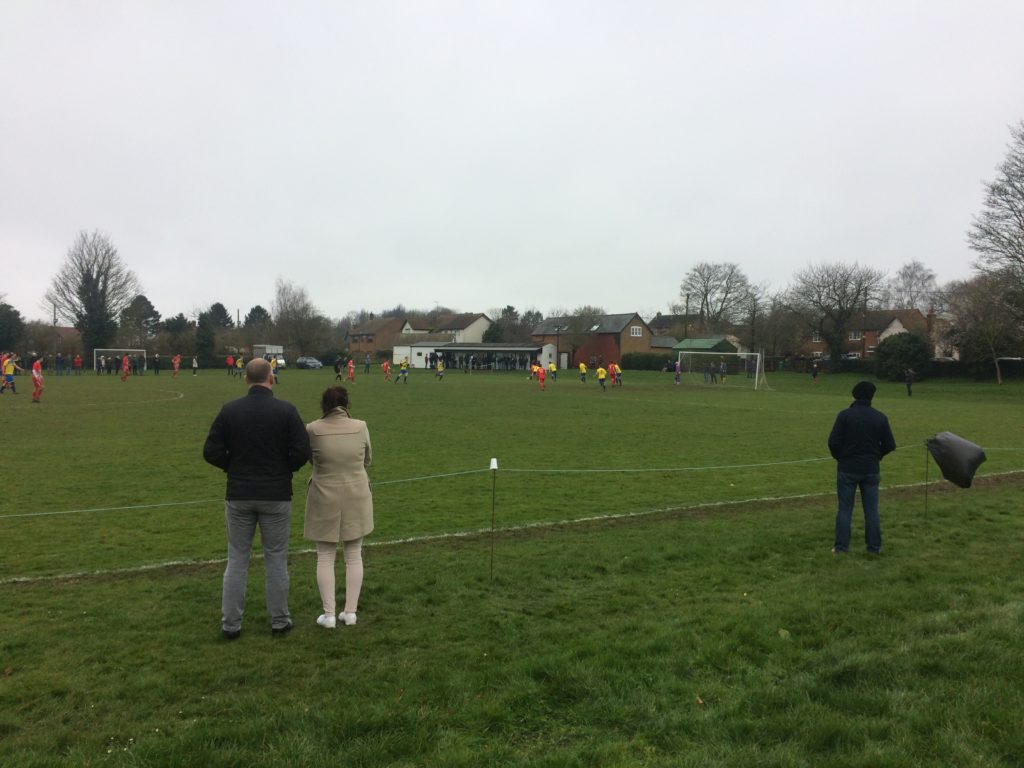