A Sound Diaries project commenced in 2008 by Felicity Ford, SOUND BANK was designed as a means of recording everyday sounds using words, drawings and/or notation. This process was conceived as a way of more deeply engaging with such questions as:

At the time, Ford wrote;

I am interested in how this project will develop my capacity to describe and remember sounds in detail and in the relationship between context and sound that the project highlights. I am also interested in seeing how this work develops throughout 2009 and in how it might – in time – be presented to an audience as a complete work.

The original idea was to create a record for every single day of the academic year beginning around October 2008, and finishing October 2009. The intention was for this investigation of recording sounds using paper and pens to neatly span the second year of Ford’s doctoral research programme. To this end, she designed and hand-printed hundreds of glassine envelopes and note-papers for ‘recording’ sounds, a process documented in a short radio feature produced for BBC Oxford’s The Hub and aired towards the end of 2008. 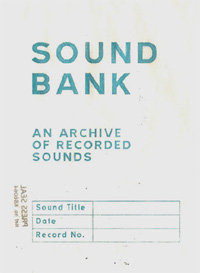 In reality, it proved difficult to record a sound every single day in the intended manner; record cards were not always to hand, and the practicalities of setting aside the time and assembling the materials required to create a recording every day were sometimes difficult to organise. Thus temporal ‘gaps’ in the SOUND BANK appeared – (though some have been mended in subsequent years in a process which Ford likens to ‘darning’) and several periods of time throughout October – October are still missing SOUND BANK records. Additionally, Ford explored various ways of presenting SOUND BANK as a participatory project for the public to interact with at various art exhibitions, such as at the group show Love is Awesome at Gallery 10, Reading, 2009, for which a special edition of SOUND BANK was produced, using red ink. 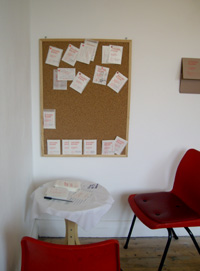 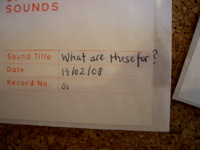 In 2009, Ford also experimented with digitising and sharing the December entries for SOUND BANK via an online Advent Calendar format, using her website, www.thedomesticsoundscape.com/wordpress as a platform for sharing the written, drawn, notated records.

Through its developments and applications, the scope of SOUND BANK continues to grow and evolve, expanding on the original impetus behind the questions asked back in 2008 concerning our imaginative engagement with everyday sounds, and the different creative ways that we can document or record what we hear.

Now in its 3rd year of life, SOUND BANK was recently presented at the Writing Sound Symposium at Oxford Brookes University, organised by SARU, where Ford explained the history and rationale for the project, focussing particularly on the written records accrued to date in the SOUND BANK. Records were handed around to the assembled audience at the symposium, and there was a Q&A regarding how we might document everyday life in sound, using writing, drawings, and notation. 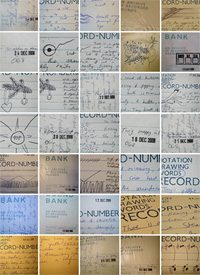 It has become a long-term goal to have a sound documented from every date in the Western world’s calendar, running from one October to the next, so that in time there will be 365 sounds, plus one from a leap year February; thus, 366 sounds in total, recorded as words, drawings or notation.

In the meantime, SOUND BANK remains a rich context for exploring the issue of how we remember and document what we hear. To contact Ford about the possibility of viewing SOUND BANK, or for details of how to apply the SOUND BANK project idea in your own institution, please leave a comment here.

One thought on “SOUND BANK”