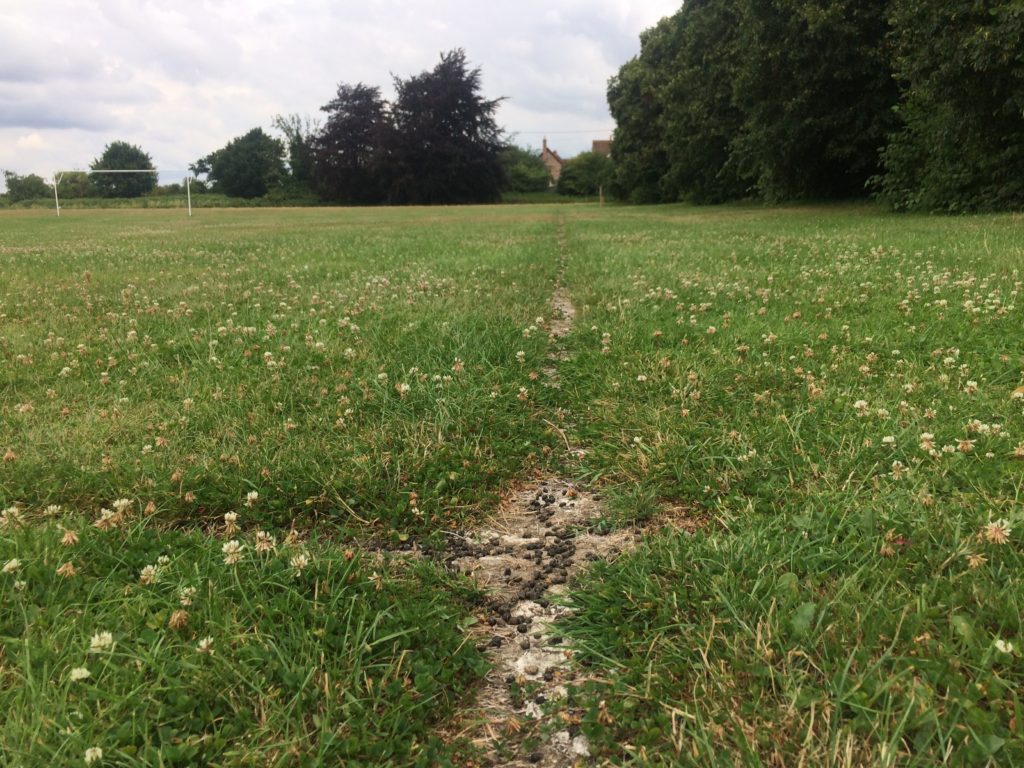 (bare earth where the white lines were marked at the village green, Stadhampton)

This is the first in a series of posts investigating the close-season soundscape of football pitches on the route between Brightwell-cum-Sotwell and Winslow.

At the beginning of July we drove the short distance from Wallingford to Winslow in Buckinghamshire. I didn’t necessarily choose the most well-trodden route and we found ourselves on a series of roads where alongside severe subsidence – particularly on Carters’ Lane that runs between Blackgrove Road and North Marston – there seemed to be a very real chance that if we stayed out too late we might find that the dense hedgerows on either side of the tarmac had linked up by the time we returned and where we had set off on a decaying trunk road we would be returning on little more than a rural pathway. This reminded me of my interest in recently disused roads and the way that they can quickly recede into the undergrowth becoming narrow footpaths bordered by a wild profusion of plant-life. These sites are a chance to see the formerly vibrant arteries of our transport networks becoming archaeological sites before our eyes and ears as the tarmac sinks into the soil beneath and the sound of tyres on asphalt becomes the sound of dry leaves dancing along a narrow paved pathway; or the sound of  wood pigeons’ wings as their undulating flight takes them from tree to tree. Given my interest in rural football pitches and considering the descent of a site of activity and movement from the present into the past I began to think of pitches in close season as archaeological sites: traces of white lines or depressed channels in the grass; a slight dip in the goalmouths; a bare patch of soil where the centre circle had been marked with a mixture of white paint and weed-killer; round holes for goalposts perhaps now covered in weeds; uneven growth patterns along touchlines; discarded, rusting, goalposts abandoned in a nearby hedge or propped against a fence and now covered in dense creepers.

I felt that I had to return and travel this route again, to pause, get out of the car, spend time, listen. The area seemed curiously remote and in particular Carters’ Lane seemed to be a road that had lost itself and its purpose as it heads North but then peters out as lanes branching to either side head East to North Marston or West to Hogshaw. All that is left of the path North that eventually curves to the East towards Granborough is little more than a desire path that for brief moments passes between hedgerows as a lane would but for the most part simply follows the field’s edge. Having taken a look at the OS map of the area I can see that Carters’ Lane is marked as a Roman Road. I began to think of a way of combining my interest in this route with the discovery of rural football pitches in close season; of using the football pitches along the route as listening stations – sites from which to survey the soundscape; to consider the ephemeral nature of our occupation of space. I began looking at maps – both analogue and digital, searching for evidence of the presence of football pitches.

The pitches that I found were in a variety of conditions from those at Wallingford and Thame both looking sprightly as pre-season and the challenge of new leagues – the Hellenic and Southern respectively – approached; to long disused pitches at Little Milton; pitches with goalposts still standing and others covered in a profusion of flowering red and white clover. At Cuddington – home of Aylesbury Dynamos – white lines had been freshly marked whilst the lines had long since faded on the village green at Stadhampton but scars remained where chemicals mixed with the paint had made the soil barren. 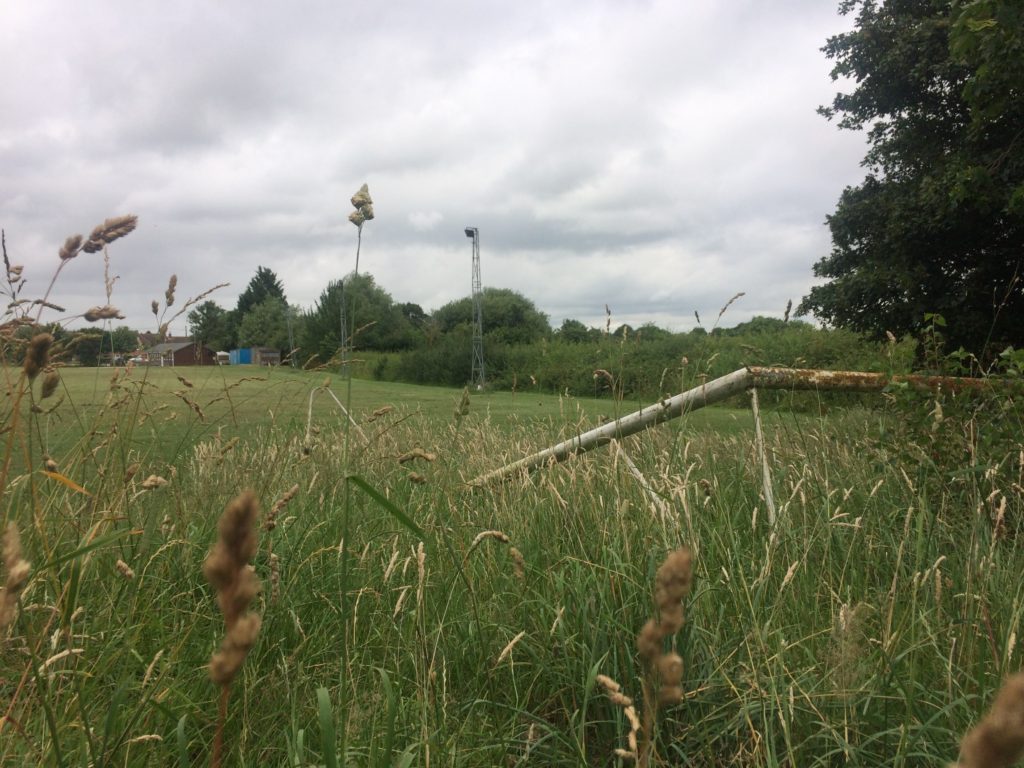 My first attempt to retrace my steps on the route from Wallingford to Winslow was brief. I was in Long Crendon for a meeting and rather than head straight home I decided to strike out on the route. The first village I came across was Chearsley. Following investigation it seemed that the local football team Chearsley Cricketers FC had folded in February 2016. I found this message on their website:

After yet another frustrating week having to chase up people to even reply to text messages and ultimately an inability to field a competitive side the club have made the difficult decision to fold the club after 10 years. Those that have had the thankless task of running the club over the years deserved better.

Welcome to the home of Chearsley Cricketers FC. Providing 10 years of footballing mediocrity 2005-2016.

In the 2015-2016 season Chearsley Cricketers FC played in the Aylesbury Sunday Combination Premier. Home matches were at Towersey Fields so that’s where I headed to listen:

A bird-scarer sounds complete with reflections from the house fronts on the other side of Thame Road; a distant train – I hear undulations in the sound as it moves from rail to rail; a drone close by – or is it a chain-saw?; the shimmer of poplars in the breeze – the aeolian drone of wind through the leaves; the chain-saw returns – sporadic; birdsong is distant – articulating the hedgerow and fences that mark the boundaries of the playing field – silence in the open ground except for the occasional forays of swifts and a solitary Red Kite; abandoned goal-posts in the long grass; passing cars are not travelling fast enough to fully rise above the drone of the poplars – perhaps on a day when the road surface was wet with rain; a swallow calls – a dissonant multiphonic; a cow; the gentle pitch-phasing of a passing passenger jet; greenfinches in the car park; the bird scarer sounds three times – the third time lower and with a ricochet of rapid reflections; jet engines resonate through the cloud cover and blend with the aeolian drone of the poplars; the chain saw; a Red kite passes – calls once – I strain to hear the flap of its wings but hear nothing.