This is the third in a series of posts investigating the close-season soundscape of football pitches on the route between Brightwell-cum-Sotwell and Winslow. There are more details of the project here.

The second journey I took in this study consisted of visiting three pitches with a notebook as my only recording device. I began at Long Crendon, sitting on a bench and listening to the sound of the motorised roller on the cricket square, before heading north-east to Chearsley – which had led me to Towersey Park on my last journey – and then on to Cuddington and Ashenden. The shape of the playing fields at Cuddington is curious – like a rectangle with one corner cut off. The football pitch is marked out against the boundary that runs south-west to north-east. Beyond the pitch there are cornfields; rows of electricity pylons; and the A418. There is a white-washed breeze-block dugout with clearly marked home and away benches. I headed for that, took a seat, and listened: 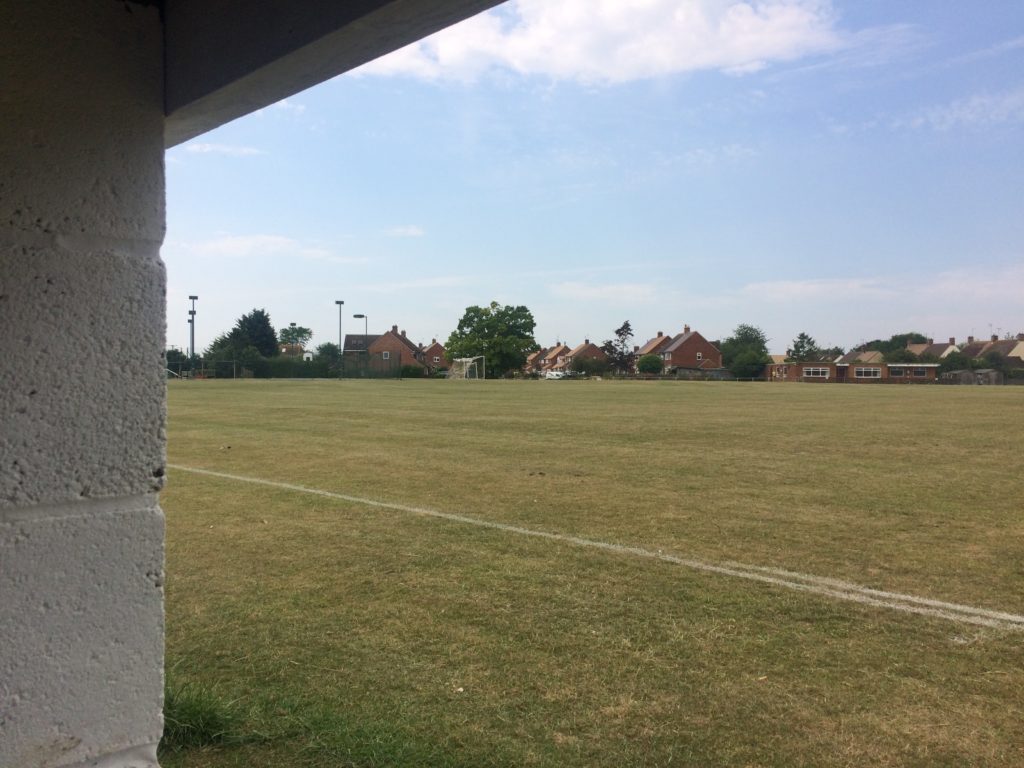 (looking out from the away dugout)

A sheep in a distant field; the buzz of a fly comes and goes; distant sound of tyres sounding the road surface blends with the sound of the line of trees to the north of the playing field swaying in the breeze; the flap of wings as a small bird – perhaps a sparrow – dashes past the dugout; the fly returns – the buzz resonating against the white-washed breeze-block walls; air traffic lightly plays on the fringes of the soundscape – perhaps a helicopter on this occasion – with a tremolo of vibration from the rotor; a car door slams; cars pass slowly on the Aylesbury Road creating graceful waves of sound; the wings of a butterfly are occasionally audible as its erratic flightpath takes it in and out of the dugout; the call of swifts as they dive towards the centre circle then stay low; a babble of birdsong in the surrounding hedgerows – wrens, sparrows; the distant sound of geese calling in flight; a solitary crow punctuates the sounding world with four staccato calls; the light aircraft returns – twin propellers creating competing sound waves that buffet each other creating a vibrating tremolo.

The flutter of wood pigeons as I take a seat; a car passes and I can hear dry leaves and debris on the road sounding the tarmac and shifting in its wake; the breeze knocks the stems of the long grass together; collared doves call; the air is thick with the white noise of the gusting wind in the hedgerow, the grasses and the nearby trees that creates a dense shifting drone for the listener to dive into and explore; approaching cars emerge from the white noise and then sink back into it taking their sounding – their audible cloud of phasing frequencies – with them; a tractor and trailer pass by shaking and rattling – the sound reflects from the screen of trees.

Listening from the resonant shelter of the dugout made a distinct difference to what I could hear most particularly the delicate sound of butterflies wings and the buzz of insect flight. I returned to the playing fields a day later and once again sat in the away dugout: 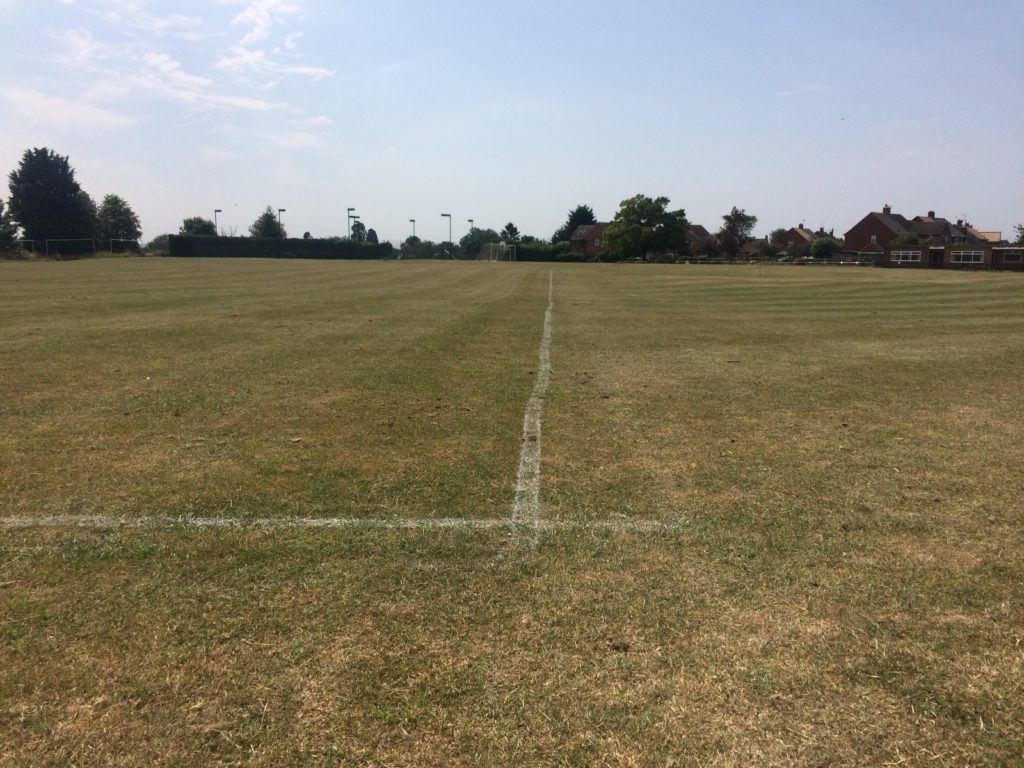 The horn of a train; cars pass spraying water as they go; the calm after the rainstorm; light birdsong from the fringes of the playing field; perhaps a passenger jet overhead blending with the white noise of distant trees shaking; the unmistakeable sound of a high speed train spreading ripples of vibration up and down the tracks; police siren – perhaps two; the sound from the road returns – the standing water amplifies the sounding tyres; a cockerel in the distant – collared doves by the tennis courts; jackdaw calls as the air falls silent; a collective whisper – a wave of hush – as a flock of sparrows dive over the top of the dugout and head towards Bernard Close; a warbler begins to sing above the shining white noise of a passing truck; quietness falls and the polyphony of birdsong becomes audible again; red kite in the distance.

Wind sounding the hedgerow, trees and long grass; the pitch-shifting resonance of distant air-traffic; the wave of rising and falling sound activated by passing cars; the polyphony of birdsong; and the sounding results of the erratic flight of the wood pigeon have been the staple listening experiences of the time I have spent exploring the football pitches between Brightwell and Winslow. The listening process has been iterative as I have become more familiar with these elements attempting to analyse them in greater detail and understand how the sound – more precisely – is being made. There are, however, also more unique sounding moments. There is one of these in this recording – 5’14” – where the sound of a small group of sparrows – not enough to constitute a flock – head north across the playing field passing directly over the away dugout. In my listening notes I describe this as:

a collective whisper – a wave of hush.

It is hard to describe the sound – it lasts for less than a second but is distinctive as it is the only incidence of the sound on the recording – an ephemeral moment. I listened and re-listened again and again.