The parish, which contained two tithings, East End and West End, in the 14th and 15th centuries, comprises 2,401 acres. It is in the Vale of the White Horse, where the country gradually ascends from the Thames to the downs, the height varying from 200 ft. above the ordnance datum in the north to 300 ft. in the south, on Steventon Hill. The subsoil is Gault, Upper Greensand and Kimmeridge Clay, the soil cretaceous clay. The principal crops grown are wheat, beans and oats. There are 1,630 acres of arable land, 695 acres of permanent grass and 26 acres of woods and plantations. There were 268 acres of meadow in 1086, and the whole parish appears in 1294 as a large manorial farm, the manor containing 1,500 acres of arable land, 220 acres of meadow, 20 acres of pasture, two dovecotes and poultry worth 67s. 1d.

(from A History of the County of Berkshire: Volume 4. Originally published by Victoria County History, London, 1924; quoted in british-history.ac.uk). 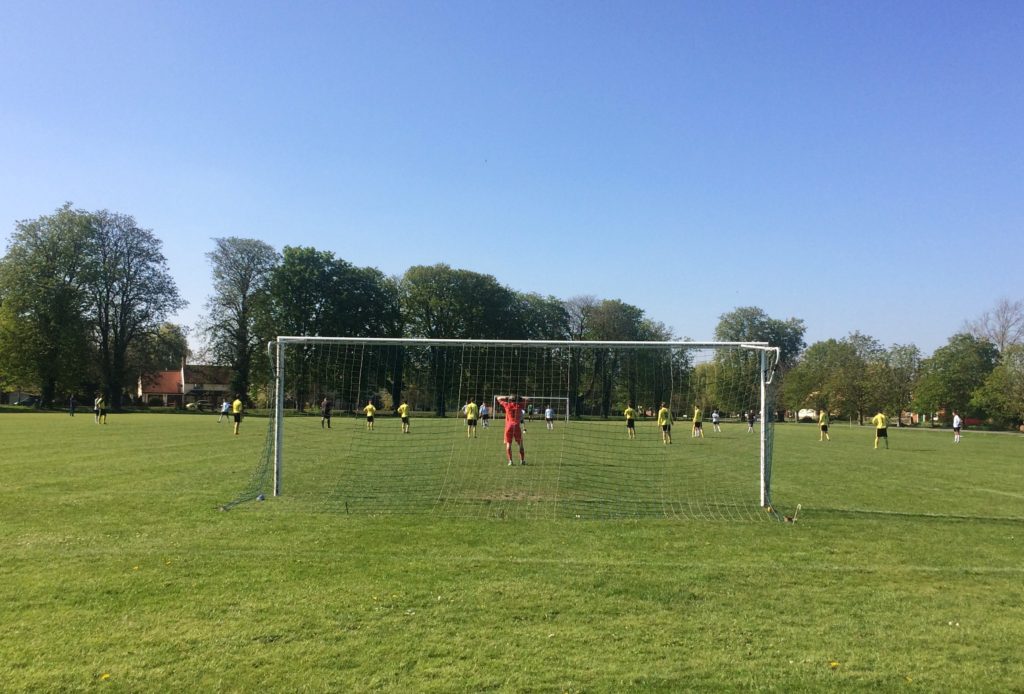 As mentioned in a previous post entitled Listening to Didcot Eagles the fleeting and ephemeral presence of the sounds of grassroots football matches on parish recreation grounds has become an important part of this project. I am fascinated by the way that the sounds of the match brush up against the dominant soundscape, that is, the sounds that through their continued presence are part of the everyday soundscape of the site. Didcot Eagles play at Brightwell Recreation Ground, a playing field at the Southern edge of Brightwell-cum-Sotwell on Mackney Lane. The village has been bypassed and so the sounds of life passing through have now been replaced by the distant white noise of the A4130. Steventon’s home ground is in the North East corner of the village but roads intersect at the South West corner of the green including the B4017 Abingdon Road. There is also sound from the Paddington to Bristol railway line that  lies to the South whilst the A34 is just a couple of fields away to the East and the Milton interchange is nearby. In short, the air in Steventon reverberates with the sounds of transit.

When I arrived for the North Berks League Division Five match against Hanney 66 I parked in the village hall car park and began to explore the surrounding area listening to the shouts of players and coaches. I moved towards the match and away again as I tried to find the boundary of encounter with the sounding presence of the match. At the back of the village hall and to the South of the village green I found a raised causeway, stepped up onto it and began to record:

As i began to think about writing this post I did some research about Steventon and discovered that the Causeway I had been standing on was part of a medieval causeway that runs from the church at the South-West edge of the village to the village green and beyond as Milton Lane becomes a track and then a narrow footpath. The football matches played on the green for the last hundred or more years, then, become part of the sounding history of the causeway, part of the evolving soundscape of the village, part of the auditory fabric of the inhabitant’s everyday experiences. 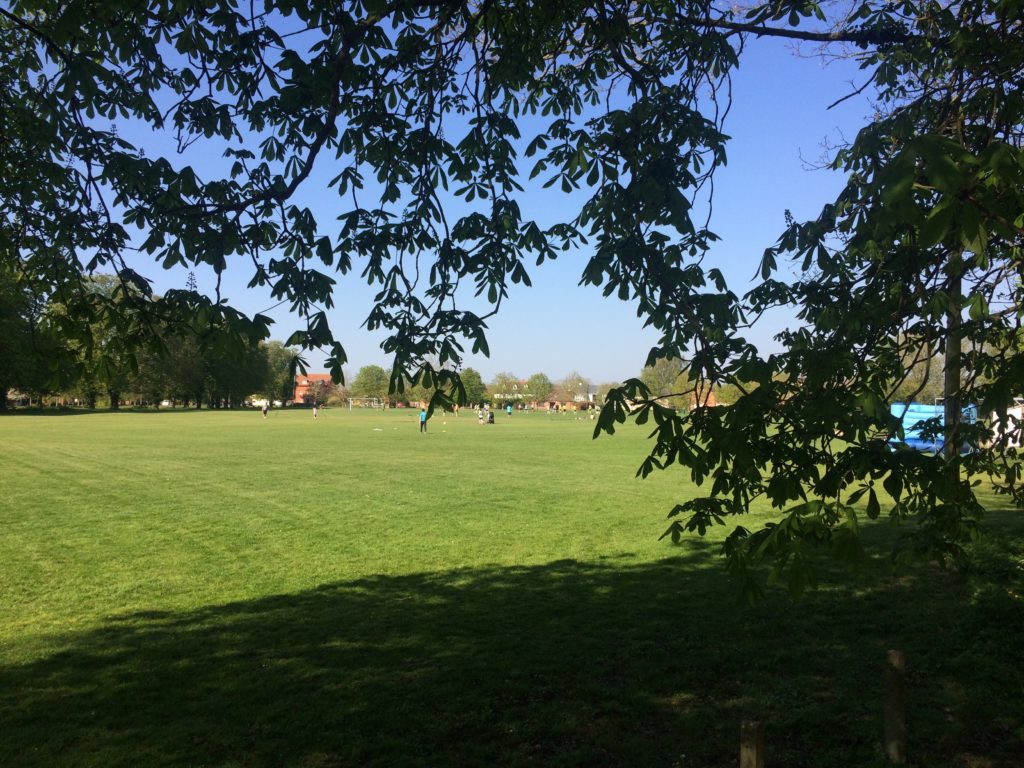 I moved along the causeway and began to hear the sounds of an air pump feeding the bouncy castle at the social club:

Walking around the back of the club house I stood at the edge of a small car park and listened as one of the players struggled with a padlock as he tried to get back into the changing rooms. I walked across the green towards a bench situated between the club house and the pitch. I took a seat, changed the batteries in my Edirol and listened to the ebb and flow of the match:

Having spent some time on the bench I wandered around the pitch and took up a position on the East side of the village green roughly parallel with the half-way line and spent some time listening to the match. One of the most distinctive aspects of the on pitch communication was the use of Stivvy as an abbreviation of Steventon. this interested me because up until the C16th Steventon had a variety of variants on the name most of which had i as the first vowel rather than the current e including Stivington, Estiventon and Stiventon. Perhaps, then, the abbreviation as heard here is a survival from an earlier iteration of the name of the village:

left and right
press left
make sure you come out
it’s going
it’s going
it’s going
get it under
your ball
it’s gone
it’s gone
behind you
turn
turn
turn
to your left
step to your left
there you go
sorry
sorry
it’s good enough
it’s good enough
getting further back here
in here
in here
you’re in
and challenge
challenge then
retain it
square
in the box
time
time
‘ead
great knock
unlucky
time
time
push out
push out
unlucky
good save
well done
right
set again yellow
let’s keep it loud Stivvy
let’s keep talkin’
drop a bit
drop with the kick
let’s call it
let’s turn, let’s turn
man on, man on
track him
get shape then
mark up
tuck ’round, tuck ‘round
man coming
man on
sit on
stand
well done
easy
time
sorry
not now
not now
not now
take him on
let’s go
blue ‘ead
time
unlucky mate
coming in here
squeeze on
no, not in there
in the middle
look for it
go left, go left, go left
drop, drop
winner
well done
stand
stand
stand
drop
good work Stivvy
come on
keep going
press
go on then
drop
man on
ref
ref
unlucky
get shape then
alright
i’ll dummy it for him
who wants it Hanney
drop for the kick
keep dropping
keep dropping
no fouls
take it in
take it in
six yard box
make something of it then Stivvy
drop
Stivvy
work
get your shape
well done
early ball
let’s get on it
shuffle over
shuffle over
option there
man on
let’s hold
hold
through ball
hold the ball
watch that
watch that
stand
no foul
ref
yes
pick him up
away
make him play
make him play
back if you want
there you go
ref
runners
run the ball
good play boys
pick him up
you’re giving him too much space
fucking joke
fucking joke
all the way then Stivvy
stay back
keep it going yellows
it’s not over yet
back in
let’s go again then yellows
tight then yellows
who wants it
time
time
sorry
wide
recover
recover

As the match drew to a close I walked back across the village green and sat on the grass near the club house and bouncy castle. There is an ensemble of sounds here brought together by the presence of the match – the sound of the air pump mingles with the calls and shouts of children; a radio plays music inside the club house; chat at the end of the match; adults sitting at tables talking in lower voices; a buzz of activity; the final whistle.