One of the most distinctive sites that I came across in my close-season travels was Ashendon Playing Fields that sits on a ridge to the South-West of Waddesdon. The football pitch is on a considerable slope that runs between a covered reservoir at the top end and St.Mary’s Church at the bottom. The church is sited on the far side of the appropriately named Lower End – a lane that runs North from Main Street. I visited the playing fields – home of Ludgershall United –  twice in the close season. On my second visit to the playing fields the soundscape was dominated by the sound of the wind:

There was a strong wind, so strong that many of the distinctive sounding characteristics of the area – the vibrations of distant jets, helicopters, and light aircraft; the phasing white noise of the passing traffic; the calls of red kites and wood pigeons – were obscured by the many and various sounds of the wind as it shook branches; whistled through bushes and shrubs; and turned the long grasses around the pitch into a multitude of whispering aeolian devices.

So the resonating gong-like tarmac of the A34 and M40; the tremolo of light aircraft and the beating of rotor-blades; the complex polyphony of hedgerow birds; and the calls of Wood Pigeons, Collared Doves and Red Kites were obscured by the dense texture of aeolian sound – the complex movement of the wind coercing the grass, leaves, branches and hedgerows into sound. You can read more about the sound of football not happening on Ashendon Ridge here. The presence of football provides a different form of distraction from the everyday sounds of the Playing Field. The ear is drawn towards the on field communication of players the sound of the ball being kicked and the reflection of that sound as it returns from the pavilion. The ear follows the play listening for meaning to support what can be seen. However, the auditory experience of watching grassroots football is always just a little disconcerting as depending on how far away from the pitch the spectator is standing the eye sees the players strike the ball before the ear hears the sound – similarly when the ball thuds into the earth following a particularly powerful goal-kick the visible action precedes the audible one. The football pitch is a good place to discuss the relative speeds of light and sound.

I returned to Ashendon to watch the Aylesbury & District Division One game between Ludgershall United and Oving FC. The game finished 5-5. The slope of the pitch has a clear effect on the sound of the game as unusual levels of fear and anxiety are unleashed each time a long ball is floated downhill towards the opposition penalty area. The most innocuous looking through balls can become deadly weapons as they rise above the slope challenging the laws of gravity. 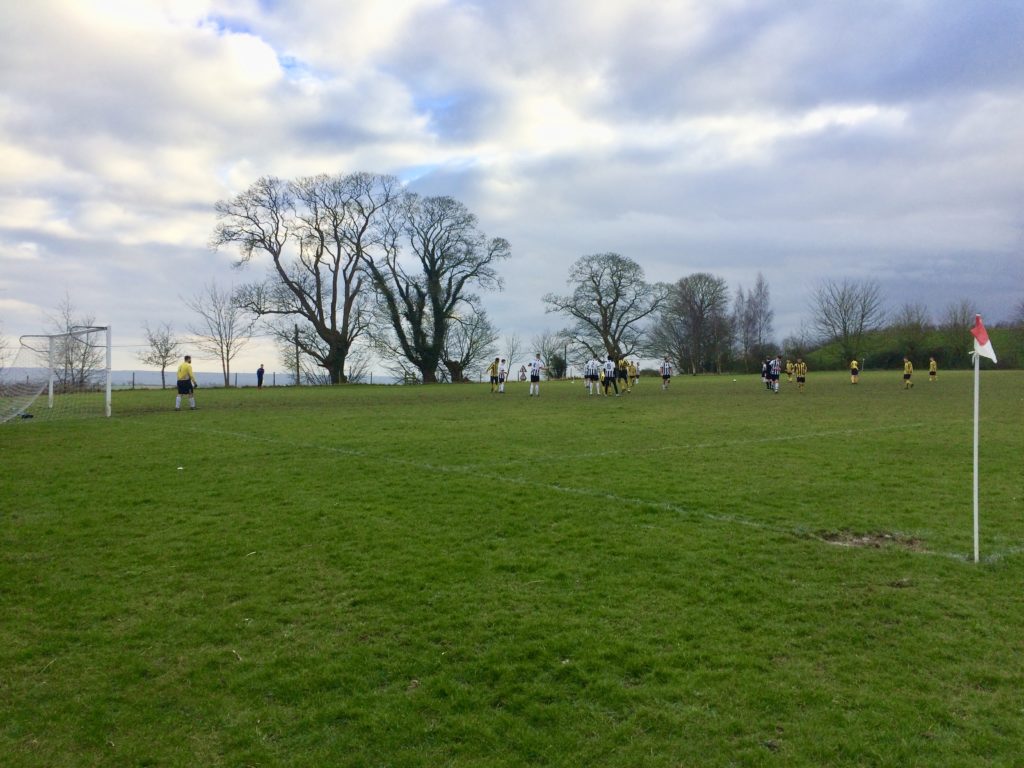 too long
don’t take that – don’t let him take that
don’t fucking
hey – hey
come in
win it
yeah
line
stand – stand – stand
yeah
line
come in
now – now – now
free
how was he off – how was he off
how was he off when he came from behind him
behind him ref
no way
ref
he ran past him
when he shot – when he shot
know the fucking rules
when he shot
the linesman flags up for anything
hey boys – hey boys
concentrate – concentrate
ludgershall wake up
you can feel it as well
hey line
shout to him
fuckin’ hell
wants
win it
behind you
go on
finish
where’d that come from
just watching
fucking concentrate
talk to each other
yeah but why hasn’t he jumped for it
he knows
boys
we’re putting pressure on ourselves
did you do that flick
Oi!
we want this game yeah
come on
boys – boys
come on boys
i’m doing what i’ve been told
yeah but then you talk
pick it up
fuck sake mate
tell me one fucking thing
carry on
watch your man
chase him
do you want a free kick for that – matey boys pushing
fucking what are you on about
handball
head
bang it
away
mate
well done boys
very good – very good
settle down
man on – man on
well done
pick him out
hey
ref
oh fuck off
get in there
everyone has their man
drop – drop – drop – drop
get in there – get in there
up
seconds – seconds
stand him up
go on then
go on – go on – go on – go on – go on – go on
now – now
boys more talking
are you playing left then
left wing
close him down
he doesn’t want it either
yeah come in left back
3-3
ref – ref
how long
your throw
come on let’s get set boys
keep going yellows
keep going
Ludgershall line
one of you
seconds
line
come back – come back
well done
turn out of there
yeah well done
options
ref
he was going nowhere
what’s the point
well done you
ref – ref
how can you see that
come on
Oi! boys
concentrate now
bounce back
none of us
we dig in we do not concede again
and again yellows
no silly fouls boys yeah
i’m here now