This is the fourth in a series of posts investigating the close-season soundscape of football pitches on the route between Brightwell-cum-Sotwell and Winslow. There are more details of the project here.

Warborough Green lies to the east of the Parish Church and is flanked by ancient lanes to the north and south both of which peter out into the surrounding fields although the southern lane becomes a path that leads to the neighbouring village of Roke. To the east there are hedgerows, open fields and a view to the Chilterns. The church clock strikes eleven; the sound of horses hooves on the pathway are reflected by the white-washed walls of the timber framed houses to the south; a push-bike is walked across the grass; swifts sound their alarm and chase insects low across the cricket square; a dog walker is disturbed by my presence when I explain that I’m there to record the sound of football pitches not in use:

When looking on aerial maps the goalposts for the currently unused 11-a-side pitch are visible although I couldn’t locate the post holes. There weren’t any teams using the pitch in 2016-2017 although at various times prior to that Warborough & Shillingford FC and Warborough & Cross Keys FC used the pitch. Both teams have now folded as far as I can tell. I have only paid one visit to Warborough so far: 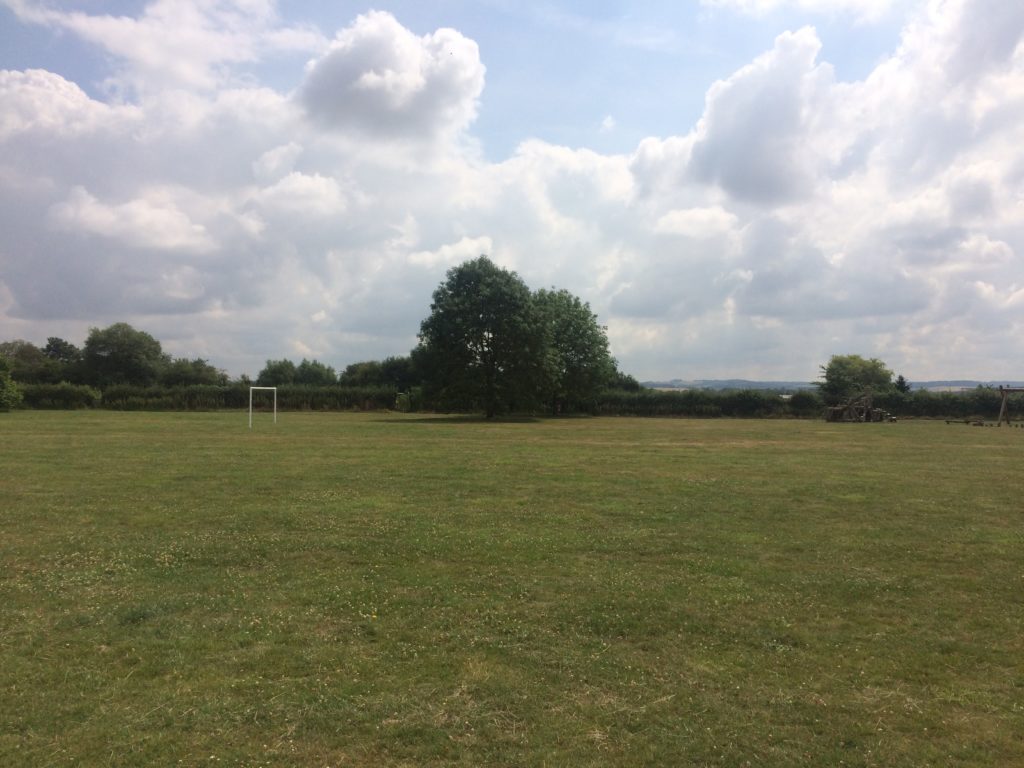 1.
Jet engines above; distant vibration; frequencies phasing in a slow motion Doppler effect; a fierce babble of birdsong from the hedgerows; a fly passes; shouts of children the wings of passing Wood Pigeons slap together; farm machinery passes on the A 329 beyond the church; horses hooves sound the lane accompanied on the opposite side of the green by a free-wheeling bicycle; the call of Red Kites; passing cars slowly skirting the green are almost inaudible; swallows dive  across the cricket square – their complex multiphonic calls beat against each other; a car door shuts and a wood pigeon is disturbed – flapping ineffectually to gain greater height; collared doves and red kites call simultaneously from opposite sides of the green; another jet – high above the cloud cover makes the air vibrate again – I begin to wonder whether we are ever entirely free of this vibrating presence; the horses hooves on the surface of the lane reflect back off the cottages on the south side of the green; a blackbird starts an alarm call; my ear catches the far distant sound of a train – at least that’s my first instinct – it could be a fast moving truck on the A4074; a trailer rattles; the alarm calls of the blackbird are joined by the high pitched percolating call of the red kite; the two bird calls cease almost simultaneously leaving a space in the soundscape for the occasional calls of swallow and swift; a dog walker approaches; dog panting; the clink of a chain. 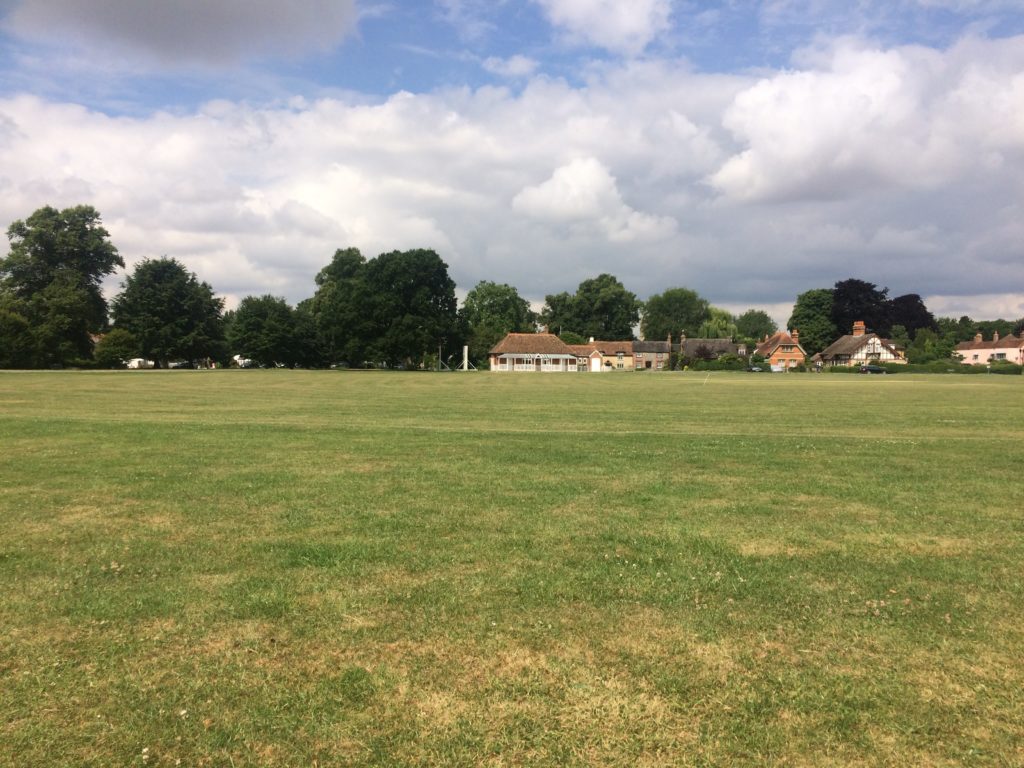 (looking west towards the pavilion)

2.
The high-pitched sound of red kite calls counterpoint the slow phasing of aircraft; the sound of football boots being clapped together reflects off the buildings to the south; the flap of pigeon wings and the pointillist babble of birdsong mark the boundaries of the green; the church clock strikes eleven providing respite from the rumble of the vibrating air; the nearby vibrations of a light aircraft are replaced for a moment by the distant rumble of jets – I begin to wonder if the sound is a helicopter rather than a plane but I can’t see the source; a dog barks – just once; as the air traffic recedes the mid-range hiss of the road returns; swifts and swallows continue their brittle song; a distant collared dove calls from the east of the green whilst the sound of rooks arrives from the west; a tractor moves slowly on the A329; birdsong continues to articulate the boundaries of the open space; the clank of a trailer; a car engine – closer now.

While writing this I have just heard that Benjamin Mendy is set to join Manchester City from Monaco for £52M and that Kilian Mbappé may be joining Real Madrid for £161M. Curious to think that the football played on the village green at Warborough over the last hundred years is related to the sport of millionaires; corporate finance; and institutionalised narcissism that saturates the media. Instead of falling victim to the boundless details of the life of modern football I would prefer to take a moment to imagine myself sitting on the green at a future date listening to the calls of players and coaches – put ‘im under; get rid; time; straight back in – reflecting back from the pavilion; the occasional clapping of spectators; the ball striking the crossbar; a dog barking, straining, desperate to chase the football; the green falling back into silence as the players, coaches and spectators disperse; the call of wood pigeons as they return to the centre circle.