In December 2008, we put out a call for submissions for recordings of the first minute of the New Year:

Where will you be at midnight tonight?

Will it be loud, historic, momentous, exciting, quiet, non-eventful, noisy, shouty, drunken, contemplative, introspective, resonant, peaceful, reflective, jolly, musical, rowdy, serene, sleepy, whispery, intimate, crowded or lonely or simple or complicated or silent? Who will be there and how will ‘they’ and ‘there’ sound?

If you want to record the first moment of 2009 and send it to Sound Diaries, we can create a collage of differing sonic impressions. To contribute a sound to this collage, simply take a recording device with you tonight and record the first minute of 2009, according to the clock wherever you are and your own definition of ‘The First Minute.’

We received many recordings from all around the world, which you can hear below.

The first minute in 2009, in Lisbon, Portugal
Location: Lisbon, Portugal
Notes: You can hear the usual fireworks and people shouting, but with a heavy air conditioner drone nearby, that kind of muffles everything…
Recorded by: Carlos Santos
Tags: 2009, Lisbon, New Year, Portugal

The first moment of 2009 in the Southeastern US
Location: A New Year’s eve party in the southeastern United States
Equipment: a Macbook and Ambrosia Software’s Wiretap Pro app to record from the internal microphone
Recorded by: Steve B, Subscape Annex
Tags: 2009, internal microphone, macbook, New Year, wiretap pro 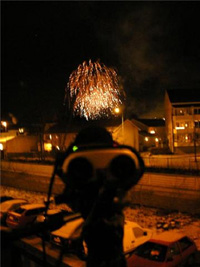 The first moment of 2009 in Gent, Belgium
Location and Time: 1st January 2009 at 12 midnight in my front garden in a quiet suburb of Gent, Belgium
Notes: One can hear the sound of fireworks, both close by and further off, with in the background sounds of toy trumpets, of children shouting and of ship horns (from the sea-port of Gent)
Equipment: Binaural recording made with Core Sound Binaural microphones and a Sony HiMD recorder MZ-NH700 (edited to 1 min. in Wavelab 5)
Recorded by: Martin Desloovere
Tags: Belgium, Binaural, Gent, New Year, Recording

The first moment of 2009 in Northampton City Centre, UK
Location: During the start of 2009 in Northampton City centre, I took a walk from near Lutterworth Road in Northampton to St Giles Church, in the vicinity of the City Centre, along the Wellinborough Road, followed by a circumambulation of the Church (in this case there was no Church service) in the build up to the New Year celebrations from approximately 23:45 to midnight. From midnight as the New Year celebrations kick in, the recording traces a walk back from the Church along the Wellingborough Road out of Northampton to the point of the start of the recording near Lutterworth Road
Notes: By walking around the Church and lingering by windows and doorways a moving trajectory of binaural soundscape recording samples the sonic interface between the events inside and outside the place of worship. We may consider a form of dimensional partitioning between the eternal realm of our inner spiritual life and the spatio-temporal bounded physical domain of the hustle and bustle of outward events and surface appearances. Yet the two meet at the interface of intention, the boundary of ethics and morals, the foundation values by which we choose to operate in our daily lives, and by which we form and create the fabric, both in terms of physical structure and the quality of life, of the society around us. The New Year Documentations also have deeper levels of significance regarding the philosophical considerations of the marking of a critical point on a spiral trajectory of annual progress and the marking of astronomical time relating to the movement of the planets. There are many ancient traditions and customs intertwined with the celebration of the New Year
The total recording lasted approximately 54 minutes. (Only a sample of this can be presented here)
Equipment: The recordings are all made using two custom modified DPA 4060 microphones used in-ear for binaural recording to a Tascam DAP1 or Fostex P4 DAT recorder
Recorded by: Dallas Simpson
Tags: binaural microphones, Dallas Simpson, Northampton City Centre