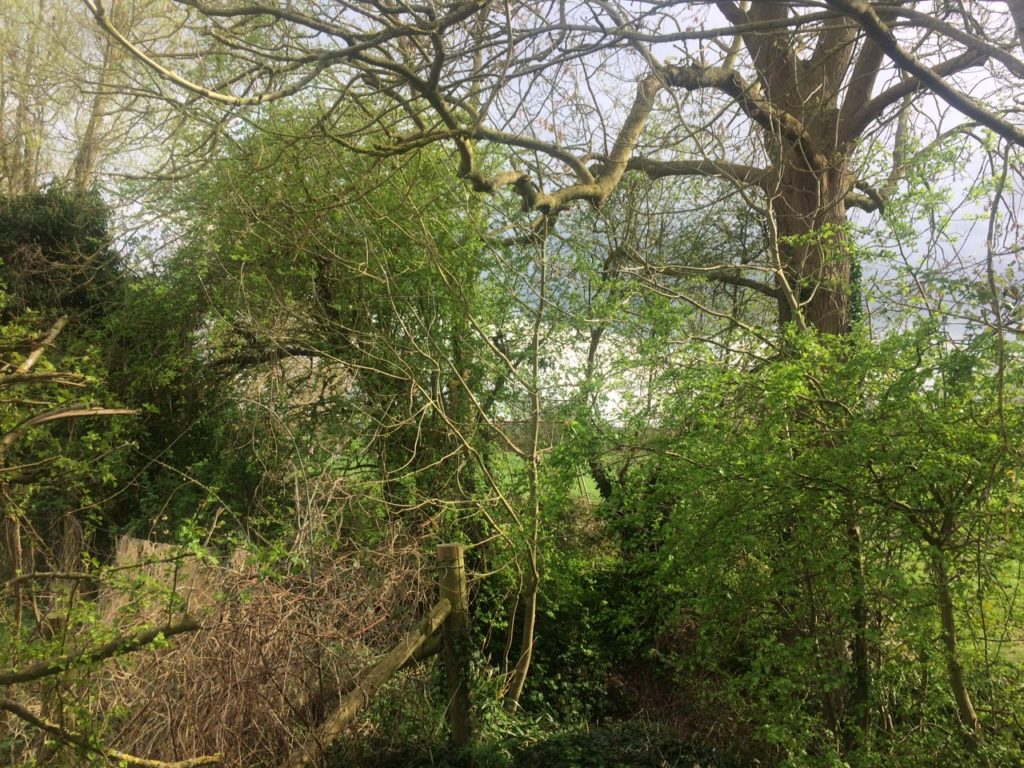 The fleeting and ephemeral presence of grassroots football matches on rural recreation grounds has become an obsession during the development of Get Rid! The recordings in this post were made in Brightwell-cum-Sotwell during the match between Didcot Eagles and Marcham Reserves in the North Berks League Division Five. Didcot Eagles featured in the previous post Presence and absence at Brightwell Recreation Ground alongside recordings of a match taking place and a match not taking place. In another post I considered the ephemeral nature of the soundscape within any given match – the tendency for the sounding presence of the match to arrive and depart like a series of waves with sound-making concentrated around crucial moments in the game.

These recordings were made as I walked towards and then arrived at the Rec. I have written elsewhere about the moment at which we first become aware of a sound – the boundary of encounter – in particular when spending time in the marshes around Aldeburgh recording sounds for a project the Swimmer developed with Roma Tearne:

Standing in the marshes, microphone in hand, headphones on I am thinking about the point at which we first meet a sound, where we first become aware of it – the boundary of encounter.  As I walk towards the beach I become aware of the white noise of waves on shingle.  How long have I been able to hear this? I retrace my steps.  I can’t hear it now.  I step forward;  one step, two steps. There it is  – faint but present.

Standing in the lane
The variable presence of the sounds of any football match mean that the boundary is constantly moving – striking out into the surrounding fields and lanes as a firm command is given and then shrinking away as the game stalls. I first became aware of Didcot Eagles v Marcham Reserves as I walked along the lane next to the Red Lion Pub and stopped to listen and make a recording:

On the path next to the allotments
I began to walk down the path next to the allotments and stopped to listen again as the on-pitch voices began to become more audible. I was the only person present at that time. As I stood still and listened there was a balance between the on-pitch sounds of the match and birdsong in the surrounding shrubs and trees:

Near the stream
As the path leaves the allotments behind there is a copse of recently planted trees and the path then leads to a bridge of split logs that crosses a small stream. I paused just before the stream and recorded again. This time the on-pitch communication was much clearer. I arrived at this point just as there was a pause in play – perhaps a lost ball or a contentious decision – there was a lot of talk directed at the referee. Whatever the case, the game was static, inactive. After a couple of minutes of this the game began to move again articulating the dimensions of the pitch beyond the stream and the screen of trees at the edge of the Rec. As the play moved from end to end and the on-pitch communication followed the ball I began to get a sense of the space the game was taking place in:

Sitting on the bench
I crossed the stream, walked out onto the Rec and sat down on one of the benches. On pitch communication was very vocal at this stage. In addition to this several families with young children were playing on the swings, slide and climbing frame.

get out, get out
all up chaps
press him
that’s a foul
hey
ref
well done lino
shut down
shut him down
come on boys
What the fucking hell
It’s gotta be said
he weren’t offside
let’s talk yeah
talk to each other
come on son
you’re on, you’re on
ref, ref
short
give it
how long have we got?
I want to go and have a beer
can you do ‘im
stay up, stay up
floor
away
boys
help ‘im
time
hit it
go wide man
time, time, time
hey
unlucky
come on
come on then boys
press that!
good touch
eh, well done lads
boys, you need to fucking mark a man
joking
coming in
get out
GET OUT!
out
back
man on, man on
you’re not going to do another one like that
and you had a shot
you cannot say nothing
he’d have blown up
winner
oh referee
ref
what’s it for ref
ref
how far are you going?
it wasn’t there
stick it go on
back in
BACK IN!
win that
and again
go on
well done
time
touch it, touch it
hey
two ‘ere
scrappy
time, time
travel
NO!
REF!
He weren’t even offside
behind him ref
every time
all of us, yeah
overlap
superb
ref
ref
ref
ref
two ‘ere
out wide
deliver
back ‘I’m up
our ball
penalty
ref
he didn’t touch me
winner
LET’S GO!
don’t fucking lose it
how long ref?
about sixteen?
How long?
sixteen?
sixteen?
hand ball!
fucking great
middle, middle, middle…

Standing close to the pitch
As the match finished I walked East across the Rec and paused to make a final recording as the home team dismantled the goals and talked about the match. The children continued to play and spilt out onto the pitch as the presence of the game waned: