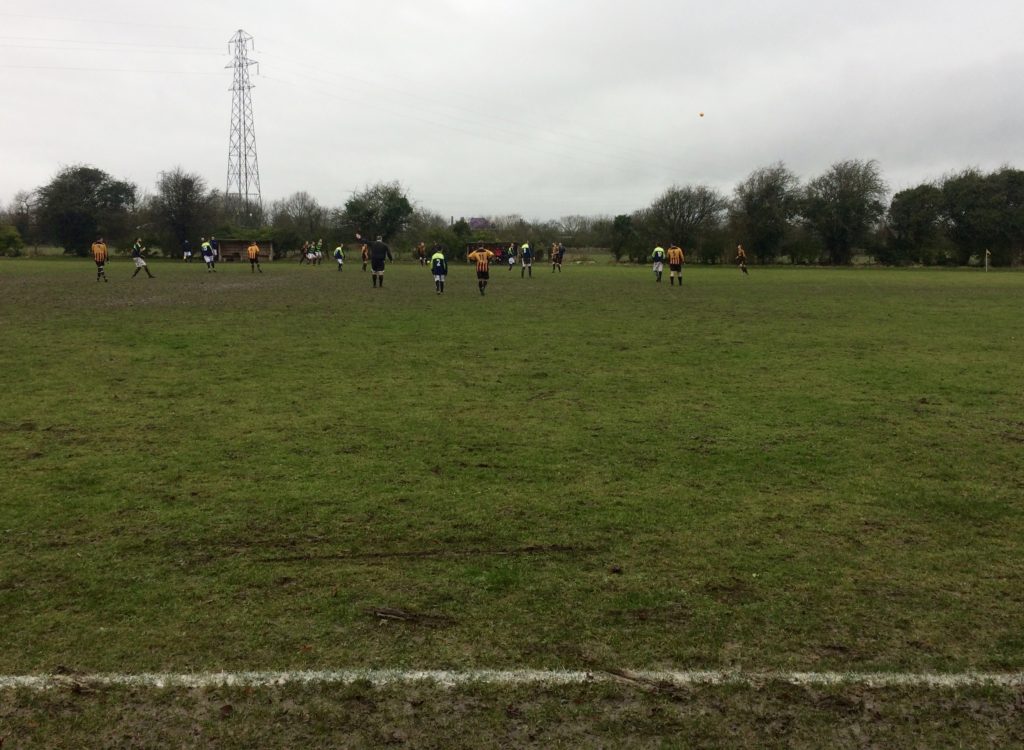 It was in April this year that I began to take an interest in the way that traffic sound shapes the listening experience at several of the pitches used by teams in the North Berks League. In spring last year I wrote this about the experience of recording the sound of football not happening at the home of Drayton FC:

The A34 runs from Salford to Winchester. The Southern leg of the road cuts through Oxfordshire from North to South. The soundscape at Drayton FC to the East and Milton United FC to the West of the road is dominated by the sound of the internal combustion engine; the resonating tarmac; and the rattle of trailers and trucks . Drayton FC play in the North Berks League and their pitch is on the South-West edge of the village. The centre circle is 175m East of the A34. If you stand in the centre-circle – where this recording was made – there are benchless breeze block dugouts; a line of low trees; and an electricity pylon that stands in the field between the pitch and the road. The embankment of the A34 rises above the field and the sounds of the road flood down the embankment and saturate the surrounding area with a band of consistent high frequency noise. The rattle of trucks; the phasing of tyres on asphalt as they approach and depart; the liquid drone of the road – these are the sounds that dominate the listener’s attention.

This week I returned to the Lockway to listen to Drayton FC v Hagbourne Reserves in the North Berks League Division 3. There is no sound baffling between Drayton and the A34 not even a screen of trees. It made me wonder what a fence would do; a tightly packed screen of beech trees; a glass and steel acoustic shield. How long has the sound from the road been this pervasive? Has it got quieter as engine noise has reduced or was rubber on asphalt always the dominant sound at this distance? The calls of the players and coaches are submerged beneath shimmering white noise.

Only when the play came over to the eastern edge where I was standing was it possible to clearly hear the on-pitch communication. If i had been standing on the A4017 Steventon Road on the other side of the houses whose gardens back onto the pitch I am almost certain that the only sound I would have heard from the West would have been that of the A34. The shouts of players and coaches would be lost in the complex wave of traffic sound – hemmed in – unable to resonate across the surrounding streets and fields.